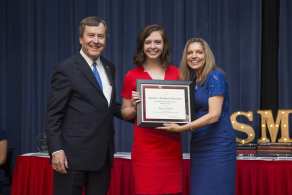 Elizabeth “Betsy” Ehmcke graduated from Southern Methodist University where she received her degree in mechanical engineering with minors in mathematics and Arabic on May 20, 2017.  Earlier at the SMU Honors Convocation she received SMU’s Presidential Award of Excellence for the outstanding student scholar – leader, one of three such awards given by the University.  A four-year scholarship from the Navy Supply Corps Foundation, specifically supported by the Newport and Hawaii Chapters, provided significant support to Betsy’s undergraduate studies.  She has accepted employment as an engineer with The MITRE Corporation at its Bedford, Massachusetts offices.