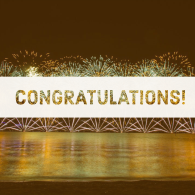 
Best wishes to all for continued success!