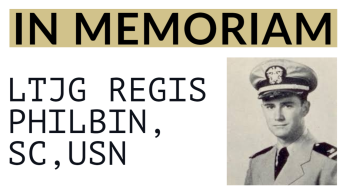 Shipmate Regis Philbin passed away on July 24th, and a well-deserved outpouring of praise and admiration rose up from a nation grateful for his legendary and entertaining career as "the iron man" of television, holding the world record for most screen hours. A myriad of accolades highlight his love for Notre Dame University and his accomplished life. But rarely is there mention of Regis' time in uniform, other than "he then served two years in the Navy before launching a career in entertainment." Fortunately, the Navy Supply Corps Foundation knows another layer of Regis...the Supply Officer, the patriot, the proud supporter of the Foundation.

Lieutenant Junior Grade Regis Francis Xavier Philbin, Supply Corps, United States Navy, was a bona fide Naval Hero... not so much for what he did in uniform but for what he did out of it. Regis Philbin was a loyal and lifelong pillar of the Navy Supply Corps Community, including active duty sailors and students, the retired community, and Navy families. Regis freely and often gave of his time and utilized numerous "platforms" to support the Supply Community--such as meeting with Navy Supply Corps School students, speaking at banquets and birthday balls, headlining important ceremonial anniversaries, and providing videos when he was unable to attend.

A great example of Regis’ support of the Supply Community was when The Navy Memorial in Washington, D.C. chose The Year of Navy Supply as their theme for the year—reinventing the museum space to display the story of our Navy Supply Corps, as told by NAVSUP. In 2010, The Year of Navy Supply exhibit kicked off with an opening reception supported by the Navy Supply Corps Foundation. From April 2010 to March 2011, the museum exhibited a series of stand-up displays and exhibits, developed by NAVSUP, populating the entire space. As an introduction to the exhibit, Regis gladly created a welcome video which was set up in the lobby as visitors first entered the Memorial. Regis’ charming personality and sincere affection for our Navy Supply Community are evident in his thoughtful introductory video below…

Regis never made a really big deal out of his Naval service or his stalwart support of sailors...but he was a really big deal in the Navy Supply Corps Community as proven in the below link, thanking him for his superb contribution to The Navy Supply Corps Year of Supply Exhibit at The Navy Memorial in 2010. The emotion shown here is even more vibrant today than it was then. So as you watch the below short video...think again about his accomplished life, including this part you may not have known, and join us in saying..."THANKS REGIS" !