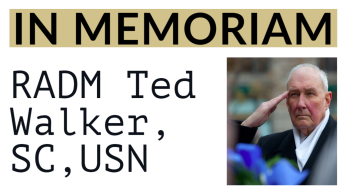 Rear Admiral (Retired) Ted Walker passed away on December 11, 2021. He was recognized by the Navy Supply Corps Foundation as a Distinguished Alumnus in 2019. After a 34-year career in the Navy, culminating as the 35th Chief of Supply Corps and Commander, Naval Supply Systems Command, Admiral Walker continued his dedication to service in both public and private sectors throughout the past 33 years since his retirement.

Admiral Walker represented the very essence of a Naval and Supply Officer. His association with the Supply Corps began upon graduation from the U.S. Naval Academy as a member of the Class of 1954. Arriving at the Navy Supply Corps School (NSCS) at Athens, Georgia only six months after the school relocated from Bayonne, New Jersey, he promoted Naval and Supply Corps service as a superb foundation for professional success. Admiral Walker consistently advocated the Supply Corps critical role as the “Golden Link” in the chain that makes everything else in the Navy possible.

From Ensign to Rear Admiral, his naval career was a track record of success framed by fearless execution, bold innovation, and the strongest possible example of leadership. Selected as a flag officer in 1981, Admiral Walker served as the Assistant Chief of Staff for Logistics and Fleet Supply Officer for Commander-in-Chief Atlantic Fleet (CINCLANTFLT) and Supreme Allied Commander Atlantic (SACLANT). Later, he led the Navy Accounting and Finance Center as Assistant Comptroller of the Navy for Accounting Policy. In April 1984, Admiral Walker became the 35th Chief of Supply Corps and Commander, Naval Supply Systems Command until his retirement.

Upon retirement in September 1988, Admiral Walker took his strong foundation of service, commitment, and excellence into the private and non-profit sectors, while concurrently becoming one of the strongest advocates of the Supply Corps value and contributions of service. In the private sector he served as Vice President, Administration and Strategic Planning with RCI, Inc., Member and Vice Chairman of the Board for Herley Industries, and a Consultant with Vanguard Industries.

Admiral Walker became a cornerstone in the success and growth of the U.S. Navy Memorial Foundation in Washington, D.C., serving as a longtime member of the Board and Treasurer. In addition, he stepped in as President and Chief Executive Officer three times to fill critical leadership gaps. During his tenure, Admiral Walker strengthened the financial stability of the Navy Memorial, built a strong relationship with the Chief of Naval Operations, and set the organization on a path that brought it to the success it enjoys today. He established the outstanding reputation that the Navy Memorial’s annual Lone Sailor Dinner enjoys today. He also institutionalized the popular Navy Log Room that was later named in his honor, in recognition of his longstanding contributions to the Navy Memorial.

Admiral Walker was also a keen supporter of Vinson Hall Retirement Community in McLean, Virginia since 1985. Again, he leveraged the leadership and financial foundation he gained in the Supply Corps to guide the organization through financial challenges. In 1989, he became Treasurer for the new Arleigh Burke Pavilion where he played a central role in the financing, construction and manning of the facility. He subsequently joined the Board and Finance Committee for Vinson Hall and served as its Chairman.

Since his daughters attended Elon University in North Carolina in the late 1970’s, Admiral Walker remained a key supporter for the school and responsible for the accessions of over 120 talented young men and women. He served on the Board of Visitors and as a strong supporter to the Athletics Department, where he was a significant benefactor.

An avid alumni and supporter of the Naval Academy, Admiral Walker served as a Naval Academy Foundation Trustee for over three decades. He was also a member of the New York and Chesapeake Yacht Clubs.

Everyone that has had the opportunity to meet Admiral Walker could not help but come away with a strong admiration for this true gentleman, incredible officer, successful businessman, dedicated volunteer and benefactor, and devoted father.